Is Kanye going to use all the colors into the 350 v2 series? Recently, Yeezy 350 v2 has exposed a variety of colorways, such as Yeshaya/Tailgate/Desert sage/flax/Linen/Earth/Cinder and so on. 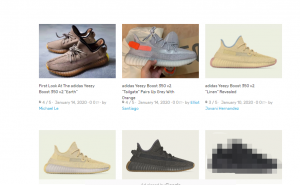 Dark brown YEEZY Boost 350 v2 Cinder is probably the most worthy of discussion because its color is really unbearable.