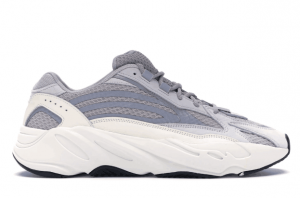 The shoes shown in the pictures are slightly modified on the basis of the Yeezy BOOST 700 as the prototype. The overall streamlined design makes it seemingly slender, and the seemingly thick outsole is perfectly matched with the overall upper. The “STATIC” new colorway features Milk White and slight gray as main tones and crafted with leather-mesh-3M reflective upper, boasting a visual layering of the overall shoes. The shoes retain the silhouette of the original Dad Shoes crafted with a combination of airy mesh and leather. The recognizable detail of the new lateral three-bar design is rather eye-catching.